When it comes to replacing missing or damaged teeth the best solution available is to receive a dental implant. Dental implants, as opposed to other methods of replacing missing teeth, are implanted directly into the jawbone, creating an artificial root which is intended to be as strong and stable as a natural tooth root. This implanted root is most commonly made with titanium and surgically placed into the jawbone. Within 3 to 6 months the titanium root becomes osseointegrated with the jawbone. Only when this happens is the implant procedure complete and ready to be fitted with a prosthetic tooth (crown) for a natural look and feel like none other.

The term dental implant technically only refers to the implanted titanium post aspect of the operation. These implants can be used to support an individual crown, or a prosthetic bridge which has several artificial teeth on it to replace more than one damaged tooth. For example, as little as 4 implants can be used to replace an entire arch of missing teeth by attaching a permanent denture to 4 titanium posts that are implanted into the jawbone. 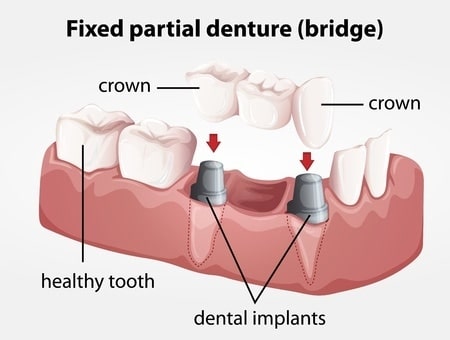 Dental implants have been used for thousands of year but for the most part were not very successful due to failed osseointegration. It was only in the last 70 or so years that the biocompatibility of bone tissue and titanium was discovered. Even so, the upfront costs of dental implants have always been higher than the less permanent tooth replacement techniques such as dentures and removable bridges, making the latter more popular amongst the general public. Here are some compelling reasons to choose dental implants to replace missing teeth, despite the higher upfront cost associated with them: